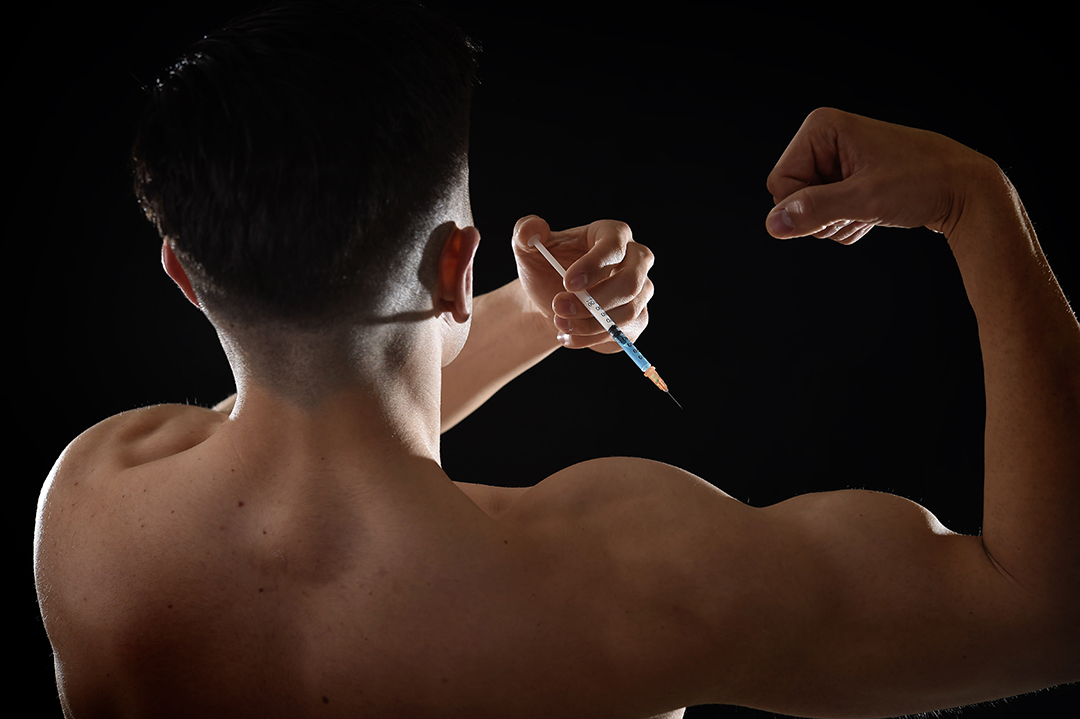 For a lot of young people, getting a perfect body is necessary to be able to conform to society’s standards of beauty and masculinity. Heedless of the cost, many of them are willing to pump themselves with physique-enhancing supplements or take unlicensed diet pills. But the risk is too high for those who use ‘muscle boosters’ without proper expert advice and medical prescription.

A case that has recently made headlines is that of Abu Dhabi-based South African teen Tristan Alberts. In his quest for the perfect physique, he had tried taking insulin without medical prescription. But what he believed to be an easy way to develop muscles sent him into a hypoglycaemic coma.

“We only found out the day my wife found my son unconscious in his bedroom. After the paramedics came, I found a syringe on his bed and it was insulin. Someone gave it to him. We have no idea how many times he took it, how he took it, when he took it, or who gave it to him,” says Tristan’s father, Neville Alberts, speaking to 999. 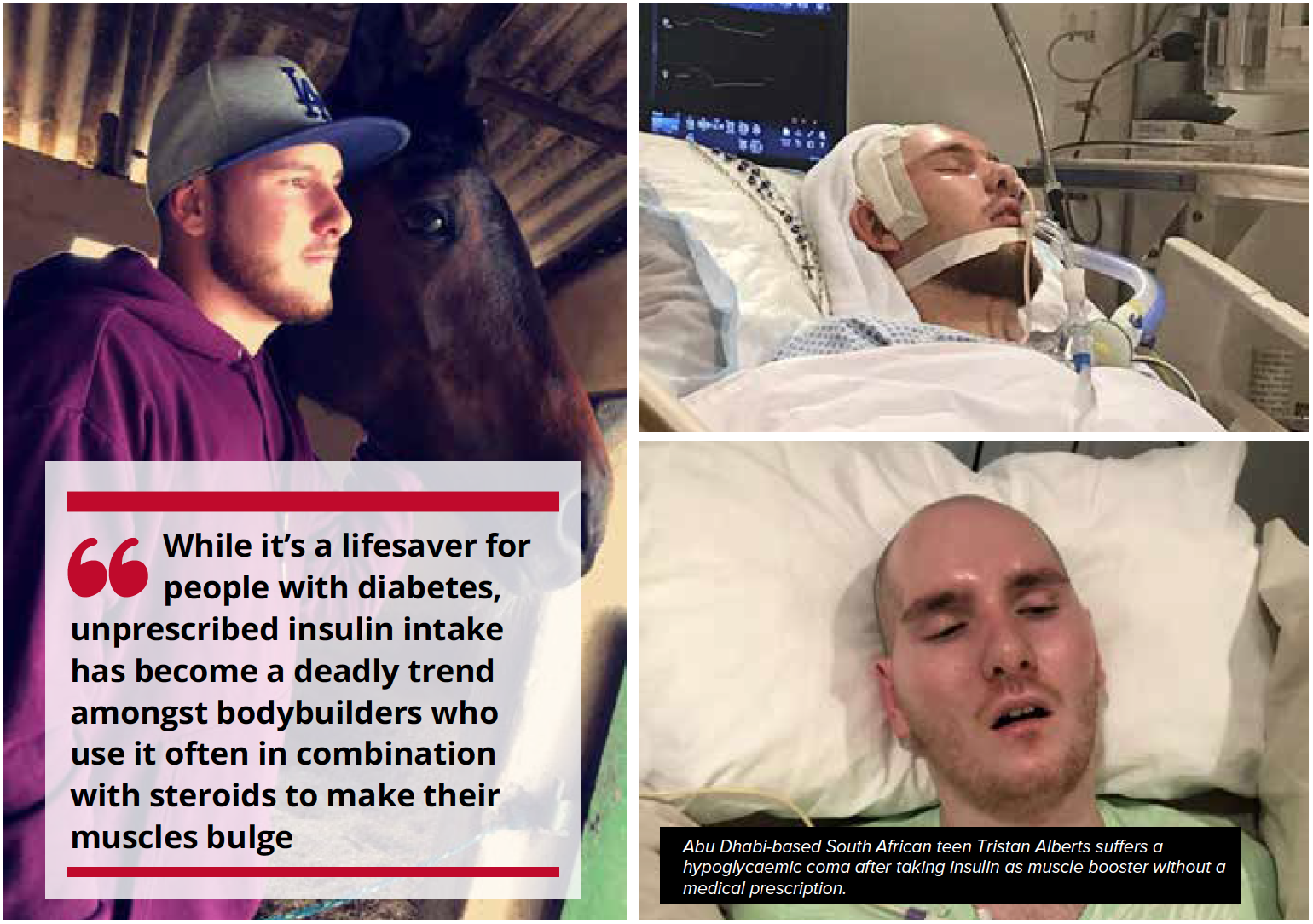 He adds, “When you’re diabetic, you’ve got to take a certain amount of insulin to control the blood sugar levels. If you’re not a diabetic, how do you know how much insulin you need to release the enzymes, and how much you should take before it puts you in a state of hypoglycaemia? Unless you go to a doctor, you would never know how much you need to use.”

That day, when his mother found him, was three years ago. Now 23, Tristan remains in a semi-conscious state. He cannot see, speak, walk, or move his arms.

“For them to give this product to my son is totally illegal,” says Neville. Tristan’s family also has to swallow the bitter pill of his growing medical bills, which now reach almost Dhs46,000 every month, much more than what they can afford. “Currently, I’m paying for everything myself; nobody is helping me at all,” says the father, who works as a manager of an automobile firm and is his family’s only breadwinner.

Neville adds, “I want other parents to be aware and know what their kids are doing. They need to go and look at the gym that their child is going to, and make sure that it’s 100 per cent safe. They also need to talk to their kids and tell them that ‘if you get approached with a product, speak to us so we can make sure it’s a safe supplement and not an enhancement drug.’”

The father shares, “I go to see my son every single day. Every morning before I go to work, I visit him first; and after work, I go to see him again. I never miss one day without seeing my son.” 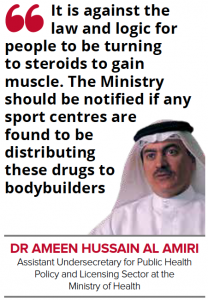 As a natural hormone produced by the pancreas, insulin controls our blood sugar level, keeping it from getting too high or too low. At the same time, it helps feed muscles during intense exercise, prevents muscle breakdown, and improves performance.

While it’s a lifesaver for people with diabetes, unprescribed insulin intake has become a deadly trend amongst bodybuilders who use it often in combination with steroids to make their muscles bulge. That explains why the International Olympic Committee has banned it since 1998.

One of the highly-publicised cases of insulin abuse happened in England in 2016, when 35-year-old aspiring wrestler was found dead in his home. An inquest into his death raised questions about whether insulin played a role. 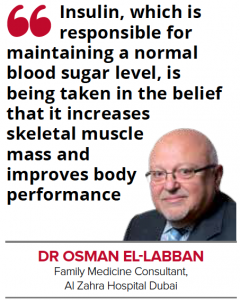 The Ministry of Health has constantly been issuing caution amongst gym-goers on taking physique-enhancing drugs without proper medical prescription. Dr Ameen Hussain Al Amiri, Assistant Undersecretary for Public Health Policy and Licensing Sector at the UAE Ministry of Health, has warned sports centres that offer steroids, saying, “It is against the law and logic for people to be turning to steroids to gain muscle. The Ministry should be notified if any sport centres are found to be distributing these drugs to bodybuilders.”

Meanwhile, Dr Osman El-Labban, Family Medicine Consultant and Head of the Department at Al Zahra Hospital Dubai, tells 999 that misusing insulin can lead to mood changes induced by fluctuations in blood sugar control, which may result in a higher prevalence of depression and anxiety, and even euphoria at times. Additionally, a high dose of insulin can lead to convulsions and coma due to a marked drop in blood sugar level.

“Insulin, which is responsible for maintaining a normal blood sugar level, is being taken in the belief that it increases skeletal muscle mass and improves body performance,” says Dr El-Labban.

The most widely abused drug type, however, is not insulin; it is anabolic-androgenic steroids, which include all synthetic derivatives, both oral and injectable, of the two natural male hormones testosterone and dihydrotestosterone. 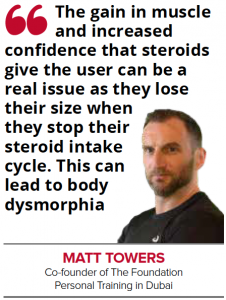 According to Dr El-Labban, anabolic-androgenic steroids are taken for their desirable cosmetic effects, defined by an increase in muscle mass and strength. Moreover, these steroids reduce the muscle damage that occurs during hard work, helping athletes to recover more quickly and allowing them to work out more frequently.

But the side effects should be enough to put anyone off. Men could develop prominent breasts, infertility, and prostate gland enlargement; women could get a deeper voice, which may be irreversible, as well as increased body hair and hair loss.

Both genders will be susceptible to liver abnormalities and tumours, high blood pressure, heart and blood circulation problems, and aggressive behaviours. Premature death has also been associated with anabolic steroid use, with suicide and acute myocardial infarction being the two most common causes, Dr El-Labban says. “Many athletes take anabolic steroids at doses that are much higher than those prescribed for medical reasons,” explains the doctor, adding that such drugs have serious side effects.

Because of the ease of online purchase, the previously unobtainable and expensive steroids have now become freely available “Most of these products come from people or fly-by-night stores that have not been licensed to sell the drugs in the country, and they’re not in compliance with international standards; therefore, they may contain impurities,” Dr El-Labban explains. 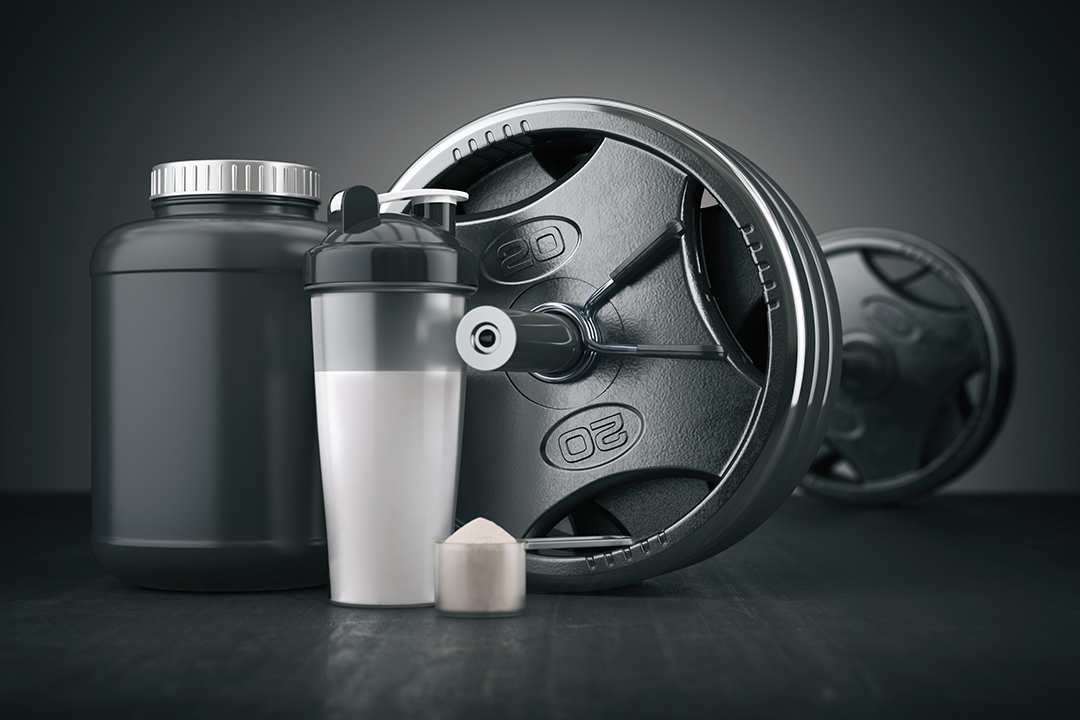 Matt Towers, co-founder of The Foundation Personal Training in Dubai, notes that long-term use of PEDs (performance-enhancing drugs) could also lead to severe mood swings, heightened aggression, enlargement of the heart, and changes in blood pressure. “Another issue to consider is the negative effects PEDs can have on the psychology of the user,” he shares with 999. “The gain in muscle and increased confidence that steroids give the user can be a real issue as they lose their size when they stop their steroid intake cycle. This can lead to body dysmorphia, depression, an inevitable return to steroids, and potential steroid abuse.”

Growth hormones, which are often taken along with insulin and anabolic steroids, could also cause an unexpected growth in other parts of the body. “I knew two different people who swore their tongues and arms both grew while taking growth hormone,” says Towers, who has been living in the UAE for eight years now and has more than 20 years of experience in the health and fitness industry as a trainer.

Despite the dangers associated with PEDs, many people still want results twice as fast but with half the work. For personal trainers like Towers, it’s often an uphill struggle to manage expectations related to building lean muscle mass. He says, “What makes this even more difficult is when unrealistic levels of muscle are constantly reinforced by other trainers who use drugs, and in the media through magazines and major movie stars.” 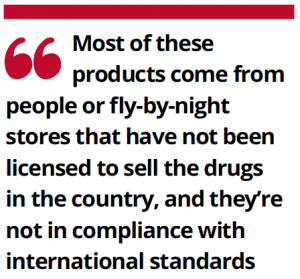 Towers believes that building muscle the old-fashioned way – by lifting weights and having a great diet – can help a person gain up to 2.4lbs (1kg) per month. The actual muscle mass gain depends on four variables.

One: the more experienced a lifter you are, the less you can expect to grow. Two: the better your diet is, the more you can expect to gain; this is a balance between calories in and out and the quality of those calories. Three: the kind of training you’re doing. Four: your genetics.

Meanwhile, Dr El-Labban advises gym-goers who want to maximise muscle gain to make sure they meet three criteria: eating more calories than they burn; consuming more protein than they break down; and following an exercise programme that is challenging to their muscles. “Some athletes make performance enhancement their priority, but this comes at a high cost,” he says. “Don’t let the initial physical achievements from using performance-enhancing drugs blind you to the long-term risks and complications – always remember that harmful and prohibited drugs are risky.” 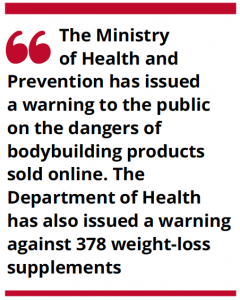 “The Ministry of Health and Prevention has issued a warning to the public on the dangers of bodybuilding products sold online. The Department of Health has also issued a warning against 378 weight-loss supplements. The public can check if a medication is certified by checking the Ministry of Health’s approved medicine list, Dubai Drug Coding List, and the Health Authority Abu Dhabi list,” he says. “Dubai Municipality has also issued a warning against 15 slimming medicines that have been confiscated from the market for containing harmful ingredients.”

According to Towers, the UAE has a zero-tolerance policy on the use of recreational drugs, including anabolic steroids. Therefore, the first risk is that of arrest. “As steroids aren’t legal, they by nature have to be procured via illegal means. This then becomes an immediate risk to health, as you can’t guarantee that what you’re paying for is what it’s supposed to be,” he points out.

Towers advises athletes to regularly check the Ministry of Health’s website for updates because things can sometimes change very quickly. “If you’re an athlete who wishes to compete drug-free, then you should check the lists provided by the World Anti-Doping Agency and compare them with any supplements you use,” he says. “For the time being, anabolic steroids are and will hopefully continue to be illegal.”