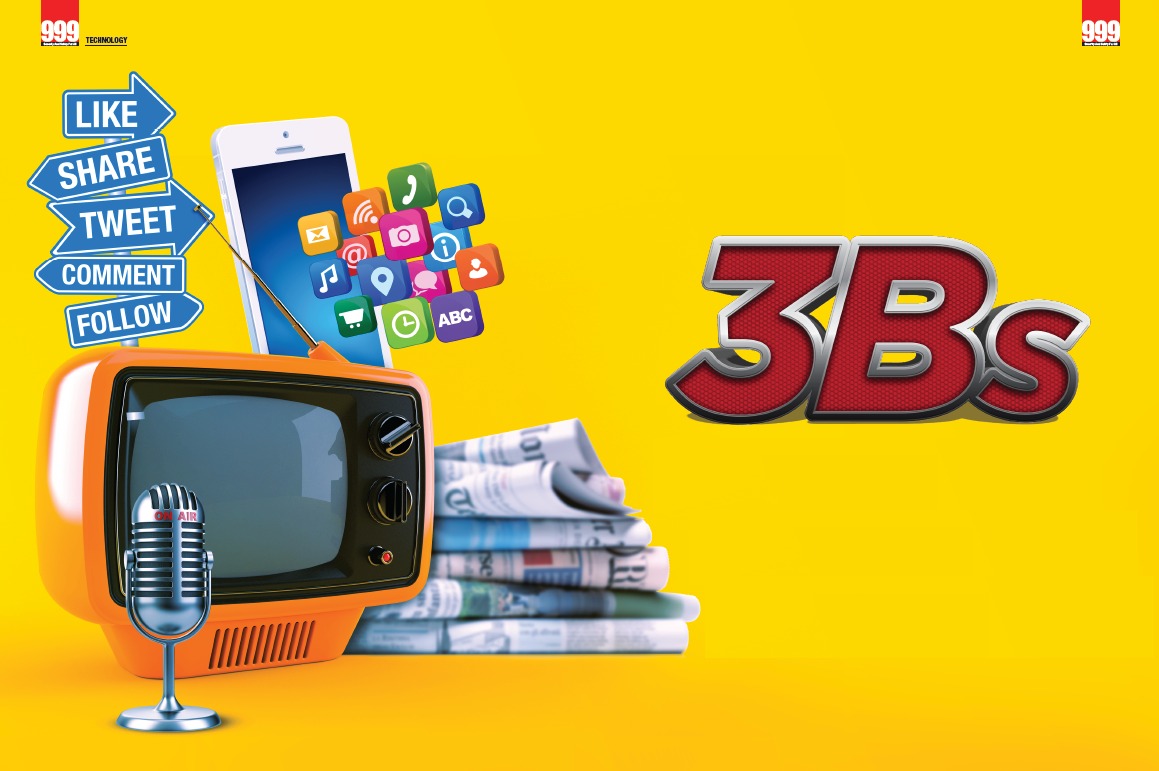 As the digital age moves forward at a rapid pace, the media industry faces both limitless opportunities and massive challenges. A recent event in Dubai analysed the phenomenon

Time was when the model of communication was very linear, one-way process where the media (sender) feed information, while audience or readers (receiver) could not give feedback or response. Fast forward to the digital era, it all changed into a multi-dimensional paradigm, where the sphere of media users’ feedback and behaviour are continuously shaping and creating a big shift in the media landscape.

The Internet also has changed or blurred a lot of concepts that people knew then. For example, the word ‘friend’ is now rarely used to refer to someone you can count on; ‘share’ has very much been abused online; and ‘game’ can now be played even without real friends and real toys.

With the UAE having the highest mobile penetration rate in the world, 999 presents this big shift.

During a gathering of seasoned media practitioners at Amity University Dubai on June 17, it was discussed that a way for traditional media to survive is to be guided by the 3 Bs: behavioural science, big data, and borderless knowledge economy.

Dr Karen Remo, Managing Director of New Perspective Media Group (NPM), stressed that this was so because traditional business models in media, marketing and communications are under significant pressure. 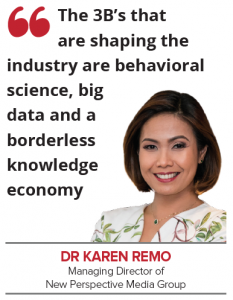 “The 3B’s that are shaping the industry are behavioral science, big data and a borderless knowledge economy,” said Remo at one of the event’s panel discussions on ‘Changing Paradigms and Practices in Media Communication’. She said that some 20 years ago, the top-bottom model was the template of communication where a few media companies influence consumer behaviours.

This, she said, had changed with digitalisation of media. “Now, the bottom-up model is more at play where the audience influences what content is produced, in which channel and at what time. What’s important is to identify what exactly are the needs of the audience,” she said.

Citing 999 Magazine, published by NPM on behalf of the Ministry of Interior, and The Filipino Times Newspaper, one of the six companies under NPM and is read in 236 countries, she highlighted that netizens digital movements and behaviours leave a big pool of information that is of vital importance to businesses because as the new oil of the digital economy, data promise understanding and addressing customer needs as well as attracting and retaining knowledge-based talents in this borderless century.

“When we analysed the data, we found out that it is no longer just about the story because sometimes, the best stories are not necessarily the most-read. It could be a great story, but if it is 3,000 words, a smaller number of people would want to read it because of the length. The timing of the post also matters, stories posted during peak hours get to have more reach and engagements,” Remo stressed.

Malik said that the awe-inspiring developments in communication technologies along with innovative approaches and disruptive models made many of the conventional media and their revenue generation models redundant. 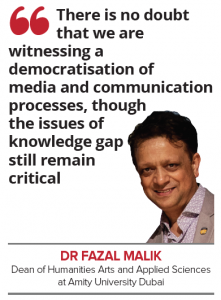 “Print editions of many newspapers across the globe have been discontinued and we see more focus on digital and online versions of newspapers, journals and glossies. Some newspapers have reduced the number of pages or gone for smaller formats.

“In the digital age, people’s tastes and the way they read news have also changed. With news available on tablets, smartphones, etc., in most cases free, newspapers and magazine owners are shifting to digital forms of publishing,” he stressed.

This, he added, had also changed the traditional revenue models of advertising. “Today, companies are getting smarter and they use social media influencers rather than the print editions to reach their potential market segment. This transformation is irreversible – a bit slow in some parts of the world, but very rapid in others,” he said.

The mammoth increase in mobile device usage, social media, cheap Wi-Fi and broadband connectivity led to a phenomenal growth in the creation and distribution of content never seen before, said Malik in a post-event interview.

“There is no doubt that we are witnessing a democratisation of media and communication processes, though the issues of knowledge gap still remain critical,” he said.

The downside was that “the slow but certain replacement of the conventional media by the social, digital and mobile media is increasingly leading to the lack of editorial control to separate facts from fictions, distinguish news from views, and to check the spread of rumours and hearsay”, he added.

He also lamented that “in this infinite media-scape, there is no legislation to safeguard the principles of ethical and professional practice.”

“No wonder,” he added, “we are dealing today with an alarming increase in the spread of fake news, creation of alternative truths, running trolling and propaganda machines.”

Malik said that the hundreds of delegates from various universities, creative industries, and research institutions from around the world who participated in this Dubai conference “took part in panel discussions to map the contours of the change and to find out a way forward; participated in fringe meetings to review and revise the current curriculum to reflect the changes in the industry”.

“There was a general consensus amongst the participants of the conference that the changes in the production and consumption patterns of media demand a new set of skills and competencies for those who want to enter into the industry. So, the focus was on revising curriculum and developing new pedagogies that reflect this transformation,” he said.

Organisers said that these changes not only offer immense possibilities but also pose huge challenges for the media industry as well as institutions that govern us and the society we live in.

Adopting a multi-perspective and multi-disciplinary approach to engage liberal arts, humanities, social sciences, business studies, economics, technology and data sciences with the current practices and future trends in communication, the conference’s purpose was to provide a “dynamic platform for a holistic understanding of the media discourse that is shaping up at the dawn of the 4th Industrial Revolution”, said the organisers.

Experts have warned that while social media and connectivity have seeming limitless benefits, these two have spawned what they call as “information pollution” that has become quite challenging, as people nowadays hardly discern true information from mere propaganda, or worse, outright lies.

This has resulted in alarming findings about how much most people actually distrust websites, according to a report cited by the Council of Europe (CoE) from BBC World Service.

The study, conducted in 18 countries, revealed that 79 per cent of respondents said they were worried about what was fake and what was real on the Internet.

Dr Claire Wardle, executive director of First Draft, and Hossein Derakhshan, researcher and pioneering blogger, argued in their CoE-published report that contemporary social technology has created “information pollution at a global scale; a complex web of motivations for creating, disseminating and consuming these ‘polluted’ messages; a myriad of content types and techniques for amplifying content”.

The scholars stressed that the scale of information in our digitally-connected world is producing an avalanche of unprecedented challenges.

What can be done?

In the UAE, data from the Global Web Index in January 2019 showed that people were spending more minutes on social media now than they did seven years ago. The average person in the country is spending 3.11 hours on social media, the highest figure in the Middle East and Africa region and the sixth highest globally. This means that a formidable chunk of one’s waking hours is spent on digital interactions. It’s a world of learning and fun out there but, like fire and the wheel—the other two innovations that revolutionised the history of mankind—the Internet has the power to lock you up in jail. 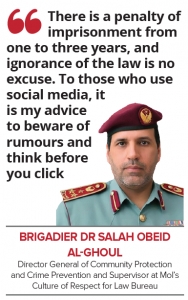 Brigadier Dr Salah Obeid Al-Ghoul, Director General of Community Protection and Crime Prevention, and Supervisor of the Ministry of Interior’s Culture of Respect for Law Bureau advised UAE residents to believe only in news that is disseminated from official sources and licensed media. “The provisions of the law are clear and apply to everyone. Some people resort to posting news or pictures for the purpose of generating excitement or increasing their personal fan base,” Al-Ghoul told 999.

“It is possible,” he said, “that a lot of such news may be seditious, aimed at inciting people or defamation — intentionally or unintentionally — or intended to have a negative public interest.”

Al-Ghoul said that such people are legally accountable as the Federal Penal Code and its amendments impose stiff penalties on those who generate propaganda or rumours, or intentionally broadcast news or statements that frighten people. “There is a penalty of imprisonment from one to three years, and ignorance of the law is no excuse. To those who use social media, it is my advice to beware of rumours and think before you click,” he added.

Meanwhile, Wardle and Derakhshan, in their report titled, “Information Disorder: Toward an interdisciplinary framework for research and policymaking,” proposed that national governments commission research to map information disorder, regulate ad networks, and require transparency on social media ads, amongst others. 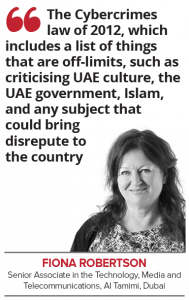 Speaking to 999, Fiona Robertson, Senior Associate in the Technology, Media and Telecommunications, Al Tamimi, Dubai, said, “All content must be in accordance with the print and publications law, which was first published in 1980 and then expanded upon by an executive resolution in the 2000s. This law applies to all media, and how they are distributed, including online.”

“The other law people need to be aware of is the Cybercrimes law of 2012, which includes a list of things that are off-limits, such as criticising UAE culture, the UAE government, Islam, and any subject that could bring disrepute to the country. In relation to the Cybercrimes law, the penalties are stiff, with up to Dhs500,000 in fines as well as jail terms. Anyone who is prosecuted and found guilty under the 2012 Cybercrimes law and who’s not a national will be deported,” Robertson warned netizens or social media users.